Has Yoga Become Too Commercialized?

Yoga dates back as far as the 4th century BC, perhaps even further. Once a daily ritual that enhanced a philosophical and practical aspect of life, it is now more of a modern fashionable trend that while in some aspects has lost much of its original intent, has transformed into a workout that can either be thought of as spiritual by some, or merely trendy. 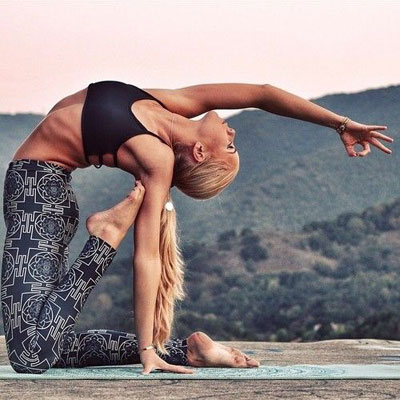 I recall years ago I went to a yoga class in cut off sweats and a tank top, and much of the rest of the class were similarly clothed. At the end of the class I was stretched, and sweating and believe that I would have not enjoyed it anymore whether I was wearing lululemon attire or not. If I showed up today dressed like that, would I be scorned?

I am not putting down being stylish but it seems most advertisement regarding yoga show a room full of lovely, proportionate young people who are donning the most fashionable and expensive outfits one can purchase. While I understand the need to wear comfortable, relevant clothing that is made from fabric that 'breaths', I think it limits the mainstream from becoming involved, particularly the elderly and middle aged, who can most benefit from this sort of daily workout. I had to buy a pair of 'booty' shorts to wear to hot yoga and they cost me $60.00. A tad extreme? Or rather has it all taken on a superficial air?

There's no doubt that the practice today, in its many forms, is significantly different from the one practiced by men in India in past millennia. Present day yoga has branched practically exponentially from the handful of original smaller schools, as has the trade-marking of these derivatives. That yoga has lost some of its originality as it becomes more a business and less a practice is no secret.

I love Rodney Yee, as he was the first DVD I ever bought, and saw his comments regarding this very thing as shown below.

'Rodney Yee' takes a slightly less forgiving view of yoga's meandering path. While he acknowledges that the natural evolution of yoga adds to its vitality, he says in most ways we're getting a little too far away from its core. He reminds us that yogis were asking the hard-hitting questions 2,000 years ago, ruminating on the meaning of life, one's personal purpose, what it even means to be human.

While in many ways yoga does 'surf the wave' of how these questions apply in the modern day, he is concerned for the overall thinning of the philosophy. He says that he and his wife and fellow teacher Colleen Saidman are routinely amazed at the fact that people are continually trading the more valuable things for the more superficial things. That's astonishing. Why are we trading most valuable aspects of ourselves for most transient, which keep us constantly craving? Distilling it even further, Yee sums it up well: It's great to get a nice yoga butt, but peace and stability in one's personal life are important too.

Having said all this, life is about change and embracing what we believe in for our own reasons. Teachers love what they do, students feel great afterwards and one can ignore the few people there only to appear as the 'in' crowd. This is life.

A man becomes too much attached to money - money is accidental. It has nothing to do with essential life. A man becomes too much attached to his house or to his car, or to his wife, or to her husband, to children, to relationship. Relationship is accidental; it has nothing essential in it. It is not your real being. And in this century, the twentieth century, the problem has become too deep. There are people who call the twentieth century the accidental century - they are right People are living too much identified with the non-essential: money, power, prestige, respectability. You will have to leave all that behind when you go. Even an Alexander has to go empty-handed. Osho

Add horoscopes to your site

Add Live Earth and Moon to your site